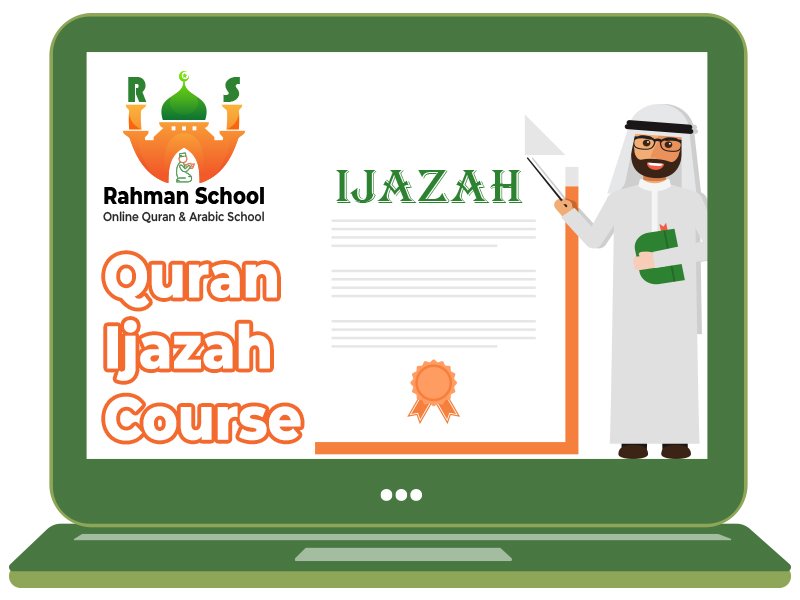 Quran Ijazah will be one of your best choices if you decide to learn it; we will discuss the ijazah Quran online and everything related to it in detail.We will give you all the information if you are looking for an ijazah course online.
This course will help you to get qualified for obtaining Ijazah online in Quran Recitation with Tajweed or Quran Memorization (Hifz) through one-to-one online sessions with ijazah certificate Quran Sheikhs. At the end of the course after passing tests & evaluations successfully, you will get the corresponding Ijazah certificate. During the course, our certified teachers will walk with you step-by-step from the basics of the Quran to the excellent level when you are ready to teach the words of Allah (SWT) to others.

First: Defining the Quran Ijazah and its legitimacy.

It is the process of the phonetic transmission of the Noble Qur’an from one generation to the next, in which the giver testifies that the recitation of the metaphor has become one hundred percent correct about the narrations – or narrations – that he authorized. He is allowed to recite, and others repeat the Qur’an.

The virtue of Quran ijazah

You can join us in the best ijazah course online; you will learn it from the best teachers with experience and high efficiency.

You can learn Quran ijazah with us through the best ijazah program with an ijazah certificate. And this is one of the essential advantages of our platform.

We also have the best tajweed ijazah course.

ijazah Quran is a license or permission authorizing its holder to transmit the Quran, issued by a person who actually possesses this authority. In other words, ijazah is a certificate that Sunni Muslims primarily used to indicate that a person has been delegated by a higher authority that already has ijazah to teach the Holy Quran.

Since this is a religious matter, it is very important to acquire Quranic and Islamic knowledge from a reliable and documented source. Accordingly, obtaining a license to recite the Quran with Tajweed or a license to memorize the Quran is a must for anyone seeking to teach the Quran. However, not only Quran teachers but also anyone excels in reading Quran Tajweed or Hafiz/Hafiz of Quran.

Because of the importance of Ijazah, Rahman School offers an online ijazah Quran for Muslims who are not Arabs or who live in non-Muslim countries.

Now, you can take the Ijazat Al-Quran course with highly qualified and accredited Quranic teachers from Al-Azhar University through one-to-one face-to-face sessions.

WHY TAKING This COURSE

We will help you to obtain the Quran Ijazah by following systematic sequential steps.

Starting with mastering the Qur’anic reading in one of its narrations, we will learn your ijazah in Quran recitation. Then we will teach you one of the texts of intonation for you.

Perhaps the most famous of which is Ibn Al-Jazari’s system.

Then we will make you read the Qur’an with the correct recitation in the manner of one of the certified Sheikhs by heart or from the Qur’an.

You will get the license of the Noble Qur’an, and you will also learn the seven readings.

If you wish to be a preacher and learn the Quran, Rahman School offers a complete Quran license course for Quran recitation with Tajweed and Quran memorization.

With the ijazah course, our certified Quran teachers will verify your skills and abilities, assess your knowledge of the Quran and the hadiths, test your area of ​​interest, and then award you the Ijaz al-Quran.

Using repeated quizzes and tests, we will assess your knowledge and control in this particular area. You will need to pass tests and assessments in order to be able to take the leave, and it will not be difficult with us.

Ijaza gives you the confidence to recite and memorize the Holy Quran. It helps you to follow the Quran lessons provided to your children, and even teach the Quran to your family members. So, enroll yourself in the Ijaz al-Quran online course and become a certified teacher and preacher of the word of Allah.

WHAT YOU WILL LEARN

1. The searching for the link of the bond with the Messenger of God:

The connection of the bond with the Messenger of God, may God bless him and grant him peace – an honor for every Muslim on earth and a source of pride for every student who owes it on its back.

Because the connection of the chain of narration tempts the close relationship between the revelation of revelation and its amount.

And it inspires those who obtain the Quran Ijazah that if he does not realize the era of the Messenger of God, may God bless him and grant him peace – with companionship.

Then he realizes his connection with him through the link of the chain of transmission from him to him through an uninterrupted chain of reciters who received the revelation directly from the mouth of the sheikh.

From the sheikh, from the sheikh, all the way to the foretaste of the warner, who received it softly from the trustee of revelation Gabriel, peace be upon him – whom he revealed as an astrologer for twenty-three years in Mecca and Medina and between them.

2. Mastering the reading of the Qur’an as it was revealed

Those who wish to obtain the Quran Ijazah strive to eliminate the melodies and mistakes familiar in Muslims’ public and private tongues.

The Qur’an as it was revealed by its compass, endowment, proper and due as if they imitate themselves reciting the verses, and whose mistake is corrected by the angel of revelation or the one charged with delivering it;  So they adhere to what is right and seek its reward, and avoid making mistakes in it for fear of punishment.

3. Ascending to the highest levels of Heaven

reading the Qur’an is a goal every Muslim strives for and in it.

Seeking the pleasure of God, an increase in reward, and the correct recitation has a plan and a destination also in Heaven.

They were safe from the wrath of God, their reading proficiency varied, and the one who obtained the approval of the Noble Qur’an in the hump of correct reading, and the one who was killed in the Qur’an with the honorable and righteous travelers.

And the one who had fun while it was difficult for him would have two rewards, and he who has no two tips is like the one who has previously attended the honorable and righteous journey.

4. Raising the status among people

The reader and memorizer of the Quran have a special place in society; That is because people glorify the one who carries the word of God in his chest and recites it during the night and at the ends of the day, even if he is in a non-religious society.

Hence Muslims strive to obtain the approval of the Noble Qur’an; Because it dyes its owner with the color lofty.

And wears him the crown of pottery in this world as she wears it in Heaven and the highest position among people – although it is not an individual goal.

Nor the primary goal of obtaining the permission of the Qur’an – it is a matter of achieving the result, it is inevitably achieved in the end; Eastern societies have more adoration of the reciter of the Holy Qur’an than anyone else.

We have provided you with all the features and details you are looking for to start the Quran Ijazah courses with Rahman school.

Your decision to start the course with our platform will be one of your best decisions due to all the features we have mentioned, and because we offer you the best prices, and in return, we give you the best educational programs.